I’ve been tagged for this #whatisyourpurposemovement challenge on Instagram so here goes:

If you’ve known me long enough, you’ll know that my journey into photography was an erratic one.

My initial aspirations to be as good as my seniors (who gave me more inspiration than probably a hundred NatGeo photo essays) turned into fantasies of following in the footsteps of some of the most prolific photojournalists in the world, before it combusted in my spectacular failure on my first day as a rookie intern with one of Singapore’s news desks. Eventually, I settled on analog photography as a way of re-connecting with my ancestor who was a photographer in his time.

Through it all, though, the reason that’s kept me going (and trigger happy) is because deep down, I want to remember. As a photographer and as an individual, I’m far more obsessed with keeping moments than creating them.

There’s a saying that no matter what changes with time, what’s in the frame remains as it is, and I think it’s true. Every photo I’ve ever taken encapsulates a point in time and a state of mind that will never be re-created in a million years of trying. Looking back at them keeps me grounded better than any endeavour or relationship I’ve been involved in, regardless of whether the memories bring joy or pain. 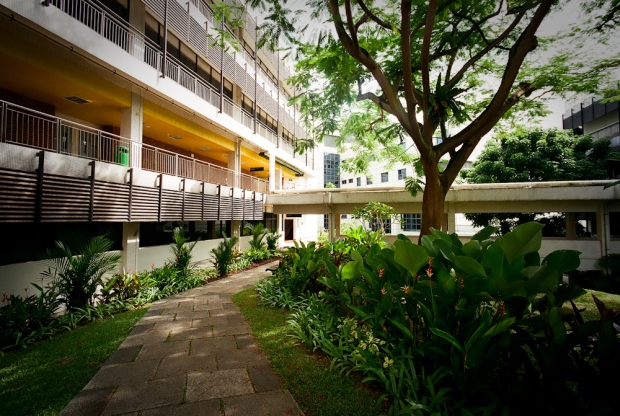 So here’s the photo that pretty much marked the point where I realised that memory is what drives me the most. It’s neither the most aesthetically pleasing nor the most memorable on its own, but it developed at a time when I was trying (a little desperately) to reclaim a chapter that was not mine anymore.

The stone path in this photo was one of the many short cuts I took between the canteen and the classroom during breaks, and I wanted to remember the way it was for me: steps, steps, steps, and small talk with my course mates with a packet of titbits in hand. The greenery was one I secretly enjoyed like a hidden nook away from the rest of the school, though not one I would deliberately go out of my way to visit.

So when I did return with my camera in tow, the ground seemed familiar yet alien, like I had overstayed my welcome in this place. You could say that nothing would happen to the place in the near future and I could always return as and when, but think of it as you winning an award, and only taking a photo with your medal on an empty stage long after everyone has left. The feeling just isn’t there anymore, and this frame bears what little remained of it. It has, to this very day, ignited familiarity, nostalgia, and pain at the knowledge that it is time to move on.

I guess you can say that you aren’t really a photographer till you have found your purpose or inspiration, and I walked right into mine during that trip. It’s not as phenomenal as say changing the world or journeying across borders, but it has driven my photography from the very start and it is what it is.

If you’re a fellow photographer, you can try this out, too. Check out that hashtag on Instagram and you’ll get a rough idea of what it is about, though I dare say there are no right or wrong answers to it. 😉

[#chueontoapayoh] Fancy authentic Thai cuisine in the heartlands? @wangthaikitchen is a casual eatery that is fitted with mouthwatering dishes and themed decor from the Land of a Thousand Smiles in Lorong 4 Toa Payoh.
[#chueonorchard] Ushering in the Year of the 牛 🐮 at @fatcowsg 🤤 on my birthday!
[#chuefromhome] Valentines’ Day or Galentines’ Day… don’t forget to love yourself and practise #selfcare everyday! 💝🙆
[#chueonalexandra] Told my friends I was craving avocado and they proceeded to surprise me with a whole Avocado Citrus Pie from @allthebatter 😱🥑🎂
[#chueonsembawang] This Double Boiled Herbs “Kampung” Chicken caught my eye at @thefamouskitchenrestaurant’s CNY preview. 😍 Featuring tender meat with robust, comforting flavours reminiscent of the soups our mothers and grandmothers used to brew for us.
[#chueontampines] Go where? GO Noodle House! The Malaysian brand has set up shop at Somerset and Tampines (east side best side!), with soup noodles, handmade Hakka sauce noodles, and bursting meatballs on the menu.
[#chuefromhome] What better way to show your love and appreciation for your loved ones, than with a gift of healthy, nourishing food this Lunar New Year?
[#chuefromhome] I’m re-visiting my commitment to reducing waste and using recyclables to be kinder to the environment this 2021. 🌎 We only get one earth that we should treat right!
[#whatchueeating] Thanks for the support! Even though we can agree 2020 was more rabak than a dumpster fire. Glad to grow my plating and food styling skills this year though looking forward to filling my #bestnine grid with overseas shots come 2021.