“My friend ate, she said two bites in and she gave up. And she can take chilli really well. Good luck!”

And on that ever so encouraging note, I embarked on my attempt at the Korean Fire Noodle 불닭볶음면 Challenge.

Ranked third on The Ramen Rater’s Top Ten Spiciest Instant Noodles of All Time 2014, 불닭볶음면 – which roughly stands for Hot Fried Chicken – has recently gained infamy for making the hardiest of spice seekers surrender in agony. So intense is its flavour, that people worldwide have challenged each other to finish one serving in the shortest time possible… or finish it at all.

Hmm, fire noodles, ALS ice bucket – why do most viral challenges these days involve hurting ourselves physically in one way or another? 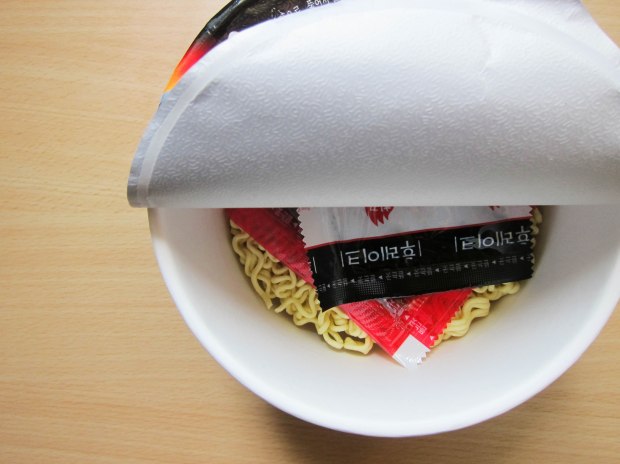 Either the stock is sold in limited quantities, or the craze has really caught on, because this particular brand was sold out in most Korean specialty marts, and it was only after much searching (and a tip-off from a friend) that I found the ominously black package tucked away in one such outlet.

The devil, as they say, is in the sauce – thick, pungent, and made from Satan’s nectar (Ok, I’m kidding.. or maybe not).

The thickness reminded me somewhat of the sauce you find in jajangmyeon, though I should have known what was coming when a bit landed on my hand and I could feel the sting!

Hmm, can I have some insurance to go with that garnish?

After surviving my first bowl of Korean Fire Noodles 불닭볶음면, I can honestly say that I’ve no idea how those YouTubers finished it in under 10 minutes – that’s how long a break I had to take between each bite. And that’s not counting the time spent running to and from the fridge to grab a cup of ice or milk. These noodles mean business.

I now know why our mothers used to threatening us with rubbing chilli over our mouths if we were misbehaving – I wouldn’t even wish those noodles on my worst enemy. And between riding a roller coaster or walking through a haunted house (two of my biggest fears), and eating another bowl, I don’t know which one is worse!

So after I’ve (barely) survived my first bowl of Korean Fire Noodle 불닭볶음면 , I thought I would compile the different ways I tried to overcome the spiciness, a.k.a. my near death experience:

– Drink ice water or milk; depending on your beverage of choice, it can either cause the spice to spread or kill the taste. Milk has a fantastic way of neutralising the heat.

– Eat as much as you can without pausing; the spiciness doesn’t kick in immediately, but spreads over time. Which means you can gulp down as much noodles as you want before it starts to sting. DO NOT FORCE YOURSELF. Safety comes first!

– Mix the sauce thoroughly so the noodles are evenly coated; the last thing you want after getting through half the bowl is a nasty surprise of extra thick sauce at the bottom. Trust me on this one.

– And if all else fails: tune in to videos of other people attempting the Korean Fire Noodle 불닭볶음면 challenge. I know it sounds silly, but knowing others have been there and done it can sometimes lend you that bit of motivation to get through your last mouthful. 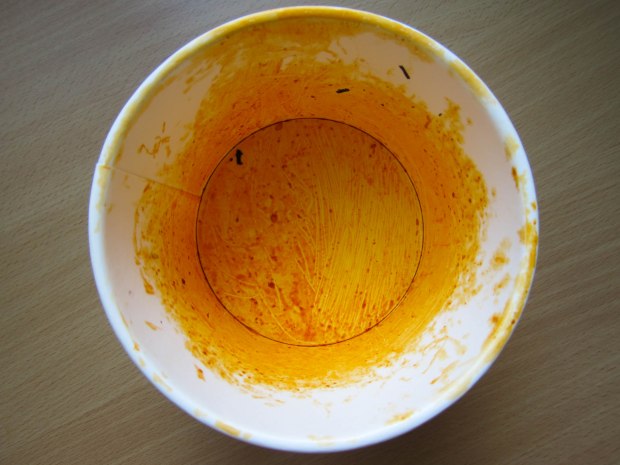 When I reached my last mouthful, I was on the verge of giving up because I had finished all my milk, and the only remedy left was my iced water which didn’t help much. But I decided to bite the bullet anyway because, hey, if I can’t finish it under 10 minutes like those YouTubers, I might as well try to finish it anyway right? It’s like running a full marathon only to turn back at the last 1km when you’ve come this far. 😀

Would I try the Korean Fire Noodle 불닭볶음면 challenge again? No really, but part of me is licking my lips as I write this. Maybe I’m secretly a masochist but I’m in denial. 😛 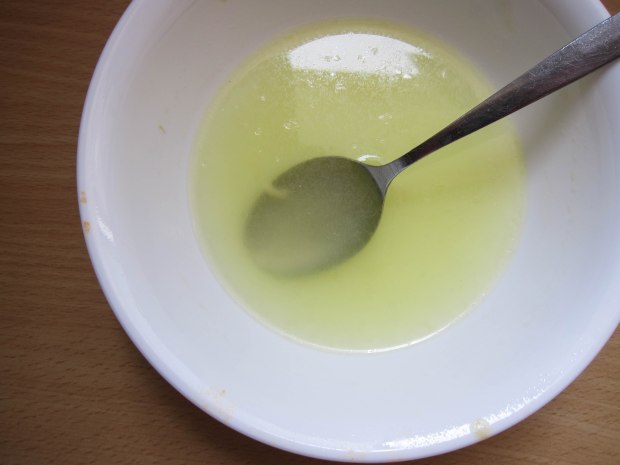 [#chuefromhome] Nothing like a DIY snack platter to power me through this weekend's events and livestreams! 🤤🧀🍪
[#chuefromhome] $5 off these plump, pungent MSW durians which were the best thing to happen this long weekend! 😍 Code at the bottom of this post.
[#chuefromhome] Me: I HATE TOMATOES. Also me:
[#chueonbugis] As an avid foodie and gamer, I must say it was the drool-worthy food that caught my eye the first time I played Genshin Impact, not the husbandos. 😬 Still, pretty stoked to have scored a table at HoYoFEST which happened last week!
[#chueondakota] Bak chor mee is one of those quintessentially Singaporean things that is hard not to love, yet is not easy to nail either. Thankfully for our local food heritage, new contenders like @mincedpork.bros are rising to the challenge of preserving one of our favourite supper dishes, albeit with a few modern twists.
[#chuefromhome] Launched three months ago, @crabnburger plugs the gap in Singapore's burger scene where meat-based goods are aplenty, but options for seafood lovers and far and few between. Tuck into mouthwatering crab-based burgers and snacks of hearty proportions and extra sinful flavours!
[#chueonchinatown] Third time lucky. 😋🍴🍝
[#chueoncityhall] I'm a sucker for cakes and snacks that come in cute packages, so when @okashigaku's cake-in-a-can first went viral on Japanese social media, I immediately added it to my bucket list for my next (if ever) trip. Fortunately, trying these cakes will be a reality in Singapore come 16 Sept, when its first overseas vending machine opens at @sunteccity!
[#chueonchinatown] Cafes are springing up around Singapore; nature is healing. 😌