After a month’s hiatus, I’m back to writing about my (not so recent) trip to Japan’s whimsical northern island, Hokkaido.

I know, I know, I’ve been tardy on my updates. But between work and getting my film developed, scanned and post-processed, I’ve finally gotten back on track, so here’s hoping it’s worth the wait! 😀 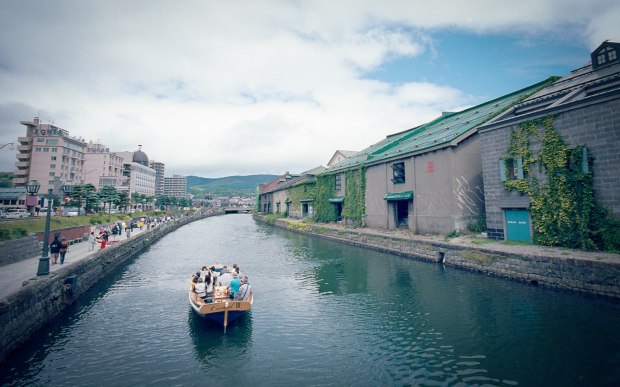 Our second day in Japan saw us taking the train to Otaru 小樽, a small port town facing Ishikari Bay in the western part of Hokkaido. Originally slated as the island’s main sea port in the 20th century, it is now home to a kaleidoscope of restaurants, glassworks shops and of course, the famous canal along which a number of converted stone and brick warehouses were built.

Though its time to shine is when it serves as the main site of the Snow Light Path Festival, Otaru Canal 小樽運河 has its own charm all year round. It’s pretty intriguing to walk along one side of the canal, on a cobblestone path dotted by street artists, souvenir stands and the occasional Victorian street lamp. 😉

Be warned, though, for the tranquil facade of ivy-laced buildings and calm waters you see in just about every photo of Otaru Canal (including mine 😛 ) is starkly contrasted by the sheer number of tourists jostling to get their own Kodak moment by this iconic waterway. And we were visiting just before the peak of Hokkaido’s summer season.

But if you absolutely must take in the canal’s sights and escape the relentless crowd, there are countless rickshaw shafu (manned mostly by university students) and boat rides that you can take, and at the same time, give your feet a rest before taking on the rest of Otaru! 😛 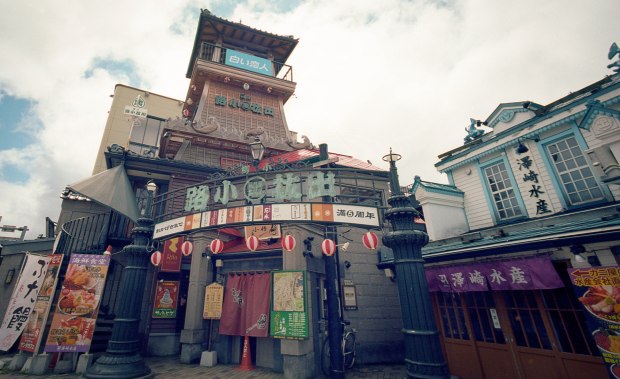 Right across the street, Otaru Denuki Koji 小樽出抜小路 is a cluster of cafes and restaurants that, with its quirky layout and mishmash of architectural styles, looks like a recreation of Hayao Miyazaki’s films from afar. Didn’t get to check it out as it was mostly closed at the time, but I’m guessing that each place sits about ten to fifteen customers tops given its size. 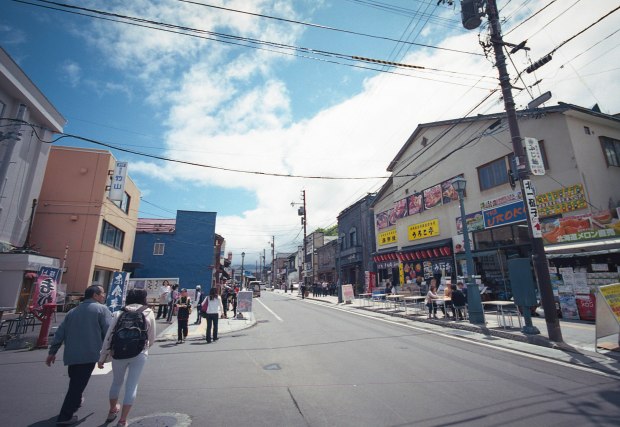 Walking into Sakaimachi Street 境町通り, there is only one word to describe it: touristy. 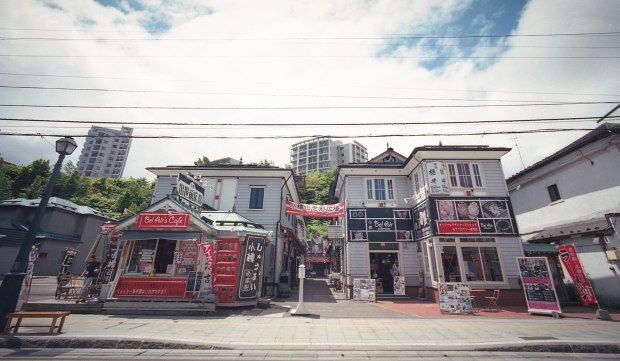 Formerly a place for trading and shipping, this preserved merchant street is thriving like a summer fun fair, with vendors calling out and plying their wares on almost every corner. And if their enthusiasm isn’t enough to convince you, the alluring aroma of their food will. 😀

There’s definitely no shortage of food, souvenirs and foodie souvenirs like LeTAO chocolate, Kitakaro Cafe cream puffs and dried Hokkaido scallops to name a few. If you’re feeling too hungry to find a restaurant, or simply can’t decide, just grab a couple of goodies and munch away whilst gallivanting past the shops. Even the local high school students hit this street by the dozens. 😉

Given its past in trading and shipping, it’s no surprise Sakaimachi Street boasts an eclectic mix of Japanese and Western influences in its buildings. Must-sees include LeTAO’s head store, one of the tallest buildings with a sweet shop, cafe and observatory.

Right at the southern end of Sakaimachi Street, Otaru Orgel Emporium is a three-storey haven of music boxes and glasswares. From exquisite European-styled boxes featuring intricate designs to quirkier creations with cutesy animals, whimsical tunes and art blend together to make really unique gifts and keepsakes. Though I would be a little bit cautious about swinging my bag around in there. And yes, tourists abound in there. 😛

Besides shelves upon shelves of music boxes, the emporium is also home to the world’s largest and second steam clock. This British-style bronze structure is another icon in its own right, chiming every quarter of an hour and drawing tourists by the dozens.

Otaru Canal and Sakaimachi Street are pretty compact and you can pretty much cover them in half a day, freeing up the rest of your time to visit other places such as Herring Museum and Nikka Whisky Yoichi Distillery.

To get to Otaru, simply hop on the JR Hakodate Line which takes you from Sapporo Station to Minami-Otaru or Otaru Station in under an hour. Do remember to grab a Sapporo-Otaru Welcome Pass, which allows you take an unlimited number of train rides between Sapporo and Otaru Station, as well as all subway lines of Sapporo for an entire day. Happy exploring! 😀

P.S. I’ll tell you more about what to eat in Otaru in my next post, so stay tuned!