There are two kinds of people in the world: people who live to eat, and people who eat to live.

Hot on the heels of Samyang’s Korean Spicy Noodles, which sparked off the Fire Noodle Challenge 4 years ago, Mamee’s aptly-named Ghost Pepper Noodles first went viral in Malaysia for its #canornotchallenge that dared foodies to finish an entire cup without any drinks, often to hilarious and catastrophic results on YouTube.

And if these pain-filled accounts aren’t enough to warn you, the jet-black packaging certainly will. I mean, it even says “Flaming Spicy Chicken Madness” on the label. Not just “spicy chicken”, mind you. IT’S FLAMING MADNESS. 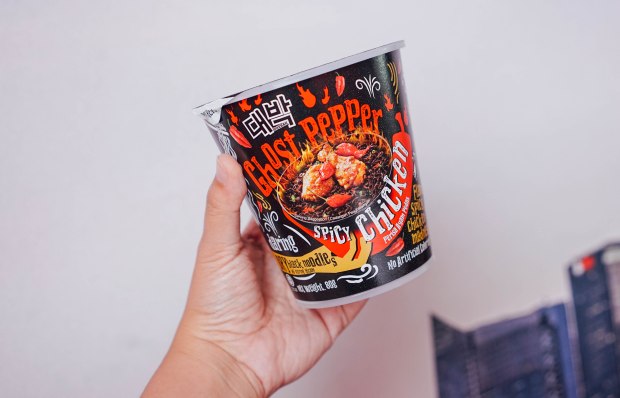 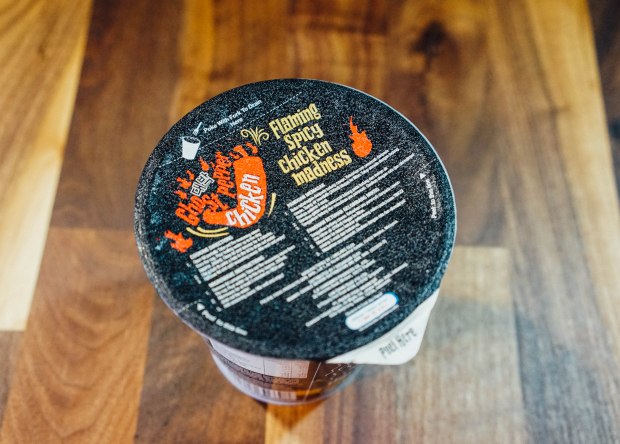 The noodles’ take-no-prisoner level of spiciness originates from the infamous ghost pepper in its seasoning, which registers more than one million units on the Scoville scale. For reference, chilli padi doesn’t even come in close at a mere 100,000 units. In other words: WALK AWAY IF YOU SPOT THESE AT ANY 7-ELEVEN STORES IN SINGAPORE.

To say that you won’t miss the Ghost Pepper Noodles from a mile away is an understatement. As soon as the first of that jet black ghost pepper seasoning hit them charcoal-coloured noodles, a distinct pungent aroma immediately filled the air. Almost as if an unholy presence had appeared in the room. An unholy presence by the name of Bhut Jolokia.

Now at the point of no return – well, not exactly; I could have heeded all the warning signs, tossed it all in the bin, and gone out for proper food, but I didn’t because #content – the only logical thing left to do was to chug those noods as fast as possible and get it over and done with (watch it all below!).

I can see why these Ghost Pepper Noodle are on a limited run. It’s clearly not something you would eat more than once, unless you are on a one-way track to take sadomasochism to your tastebuds. Or if you have a legitimate death wish. Because help me these noodles were not made for human consumption.

A couple of bites in, a stinging pain started to grip my tongue, before going down my throat to start a war in my tummy. It wasn’t before long before my sense of taste issued an emergency evacuation and left the building. CHICKEN WHAT CHICKEN?! All I could taste was the hellish ghost pepper seasoning!

Mind you, the noodles on their own smelt (and probably tasted) delicious. They have a pretty springy texture and a good bite to them. Not that that’s a redeeming factor, though.

For hardcore spice seekers who are still not deterred, you can get your hands on the Daebak Ghost Pepper Noodles at a reasonable price of $2.90. Don’t say I didn’t warn you!

Where to buy: All 7-Eleven stores in Singapore
When: September to November 2019

[#chuefromhome] Nothing like a DIY snack platter to power me through this weekend's events and livestreams! 🤤🧀🍪
[#chuefromhome] $5 off these plump, pungent MSW durians which were the best thing to happen this long weekend! 😍 Code at the bottom of this post.
[#chuefromhome] Me: I HATE TOMATOES. Also me:
[#chueonbugis] As an avid foodie and gamer, I must say it was the drool-worthy food that caught my eye the first time I played Genshin Impact, not the husbandos. 😬 Still, pretty stoked to have scored a table at HoYoFEST which happened last week!
[#chueondakota] Bak chor mee is one of those quintessentially Singaporean things that is hard not to love, yet is not easy to nail either. Thankfully for our local food heritage, new contenders like @mincedpork.bros are rising to the challenge of preserving one of our favourite supper dishes, albeit with a few modern twists.
[#chuefromhome] Launched three months ago, @crabnburger plugs the gap in Singapore's burger scene where meat-based goods are aplenty, but options for seafood lovers and far and few between. Tuck into mouthwatering crab-based burgers and snacks of hearty proportions and extra sinful flavours!
[#chueonchinatown] Third time lucky. 😋🍴🍝
[#chueoncityhall] I'm a sucker for cakes and snacks that come in cute packages, so when @okashigaku's cake-in-a-can first went viral on Japanese social media, I immediately added it to my bucket list for my next (if ever) trip. Fortunately, trying these cakes will be a reality in Singapore come 16 Sept, when its first overseas vending machine opens at @sunteccity!
[#chueonchinatown] Cafes are springing up around Singapore; nature is healing. 😌