The trouble with living in Singapore is that you’re constantly surrounded by a myriad of mouth-watering delicacies that hail from all four corners of the world. To the effect that “What shall we have for lunch/ dinner?” sparks off an unsolvable dilemma, day after day.

And let’s not forget those fusion and concept restaurants that have popped up around our sunny island. Sometimes, I secretly wish that I have an expandable tummy just so I can eat all the food I want, without risking a tummy ache or worse, growing a second me!

First world problems aside, we made our reservations at Sarang, an up and coming Korean restaurant that has garnered a lot of hype for its Korean tapas dining concept (or so they say).

Located on the upper levels of Orchard Central, Sarang has a gorgeous alfresco dining area that commands a picturesque view of Orchard Road and beyond.

And yet, we were ushered into an indoor dining area which, with its monochrome decor, looked drab in comparison. Our request for outdoor seating was met with a curt “It’s closed” from an equally curt-looking man who looked to be in charge of the front of house.

On hindsight, it might not have been such a bad idea to dine indoors, considering that construction for Orchard Gateway next door was underway. But then again, the poker faces from the waiting staff, coupled with the fact that we were the only diners at that hour, made us feel as though we were in a classroom, instead of at a vibrant downtown bistro.

Looking through the menu, we found out that Sarang’s famed Korean tapas dishes (which we were so excited about) were missing! In its place was a selection of regular Korean fare which you can definitely find at other Korean bistros.

Which was a little odd, considering that Sarang had undergone a revamp not too long ago. And no indication on the restaurant’s website that the chefs had decided to drop its tapas offerings for a more conventional menu, either. Perhaps the tapas menu is exclusively for dinner hours?

Disappointment aside, we were determined to make the most of our meal (and in part, the Groupon deal we had bought). And so, presenting our mini Korean feast!  😀 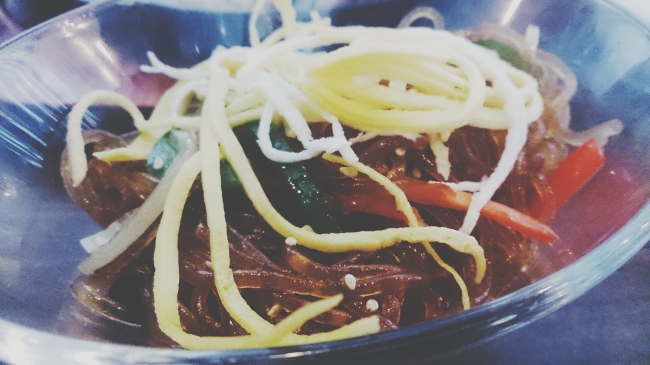 The first dish we gunned for was the Japchae, or Korean glass noodles. Made with stir fried sweet potato noodles and garnished with thinly sliced egg, carrots, spinach and mushrooms, this is a dish which I have fond memories of eating with my host family in Korea. 😀

Sarang’s version was suitably al dente. Don’t be fooled by its categorization as a “side”, though. The serving was incredibly generous and just nice for sharing between the two of us. If you’re only feeling slightly peckish, the Japchae is great as a meal, along with a side of kimchi. 맛있는!

My only complaint is that the Japchae was a tad soggy, as though it had been sitting in the bowl for a while before being served. I would have preferred it slightly drier and more bouncy in quality. 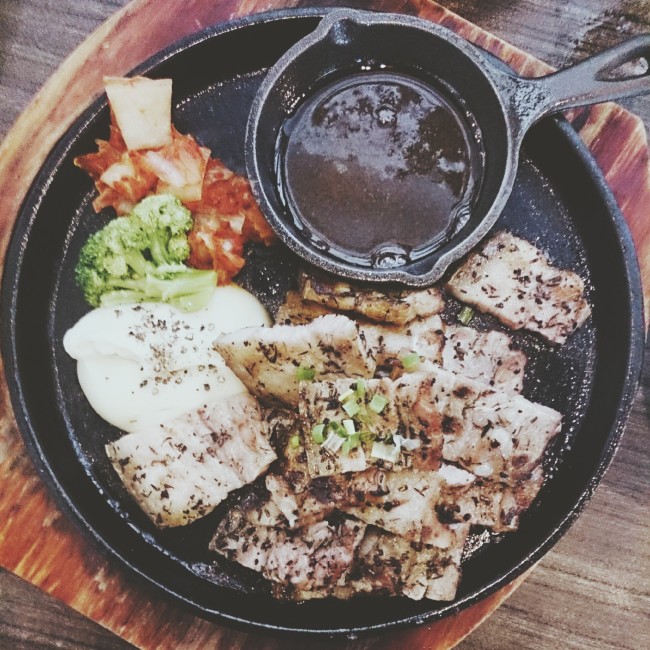 The Herb Marinated Samgyeopsal that I had was pretty generous, with slices upon slices of thick fatty pork belly meat sizzling away on a hot plate. The herbs blended well together and added a rustic dimension to the meat, making it taste well seasoned. Although the first few slices on top were a tad rubbery, the meat itself had a tender consistency to it, and went perfectly with the salt and sesame oil dipping sauce.

Visually speaking, Sarang’s version looked like a Western take on a Korean staple, as there was even a side of mashed potatoes and broccoli. Personally, I wouldn’t mind having just the meat with a bowl of rice (more on that later).

It was pretty intriguing to see a small serving of kimchi on the hot plate too, though that’s probably why it tasted a tad dry.

And speaking of kimchi, no Korean meal is complete without this beloved fermented vegetable.

Served in a shallow-looking tureen, Sarang’s Kimchi Stew looked to be a feast for the senses, what with the kimchi turning the broth a vibrant red colour. There was even a cloud of smoke rising from it long after it arrived at our table!

Portions-wise, it could have done with a few more slices of pork belly. For an uptown bistro, Sarang could have also done a little better in the taste department, according to my friend who had it.

If you decide to order any of Sarang’s soup-based dishes, do note that they are not served with rice. You can get a bowl of it for $2, but I would recommend sharing a bowl since the ingredients should fill you up pretty quickly (doesn’t hurt to cut down on ’em carbs, either! 😛 )

Service wise, Sarang left a lot to be desired. For a restaurant that’s been graced by renowned K Pop stars, you would think that the same treatment extends to their customers too. Still, Sarang does dish up a number of interesting takes on everyday Korean fare, which might just be worth the seven storey climb for. 😉