And not forgetting the ever-growing food trend: meals in a jar!

I’ve always been inspired by Grin Affair’s style of serving their cakes in cute little jars, but since my culinary skills are not good enough for the baking world (yet), I decided to try something similar with some pasta I’d whipped up.

I’m pretty excited about this meal in a jar deal ‘cos I’ve never done anything like this before! 😀

Home-cooked Aglio Olio with Chicken and Mushrooms, topped with lettuce and a hard-boiled egg.

Preparation wise, it’s pretty much the same as how you’d normally cook pasta, except that you’re serving it in a jar, so it’s inevitable that some ingredients are gonna get layered on top of each other.

To avoid this, what I did was to separate my ingredients and add them one by one, before shaking the jar a few times just to mix them up (don’t forget to close the lid first or you’ll be eating it off the floor!). For this recipe, I layered my lettuce first, followed by spaghetti, followed by stir fried chicken and mushrooms. Gave it a couple of shakes, and what I got was a very yummy jar of pasta! C:

You can also check the contents of your jar in between so you can decide how evenly distributed you want your ingredients to be. C:

Don’t stuff your jar too full either, or there won’t be enough space for you to shake it out! 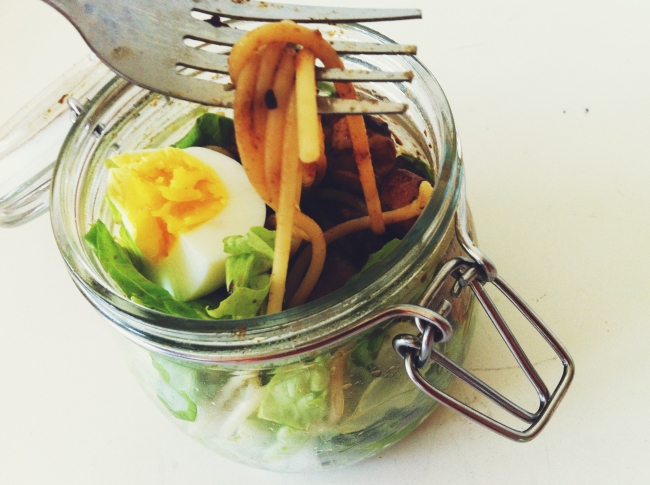 I had just enough space for a quarter of a hard boiled egg C: The yolk’s a little crumby, though. :C Oh well, I’ll get it right next time. C:

If you’re worried about the jar being too narrow and deep to eat from, don’t! I used the Kroken Jar from IKEA® and it works just fine. With its round shape and airtight seal, it makes a great lunchbox too! C:

Jars are as easy to store as your regular utensils, so when you’re done, just give it a good rinse and keep it for your next meal, or maybe, just maybe, a new recipe… 😉

A tiny update: I finally manage to de-toxify myself of the double Espresso whammy from my previous adventure at Starbucks; all it took was a couple of afternoon naps to get over the heavy eyelids,  and lots and lots of my new friend, water. Phew!