I’m bubbling with excitement as I write this post, as I’m venturing into yet another topic on this humble blog of mine, and that is one of my pet loves, travel! 😀 Well, what’s life without exploring new things now and then? 😉

Speaking of new things, I finally realised my dream of travelling to Hokkaido with my family last week, ever since I learnt about its abundance of fresh seafood, scenic spots, and fresh seafood at scenic spots. Sadly, I didn’t get to travel last year due to time and financial constraints, but as they say, better late than never aye? 😛

We caught the red eye flight to Haneda Airport 羽田空港 in Tokyo via Singapore Airlines, and transited to a domestic flight to New Chitose Airport 新千歳空港. I have to admit, I was a tad jittery about making it to our Hokkaido-bound flight despite being a seasoned traveller; after all, you never know when Murphy’s Law would kick in.

It turns out that our worries were unfounded; the transit was as smooth as butter thanks to sheer Japanese efficiency! From the signboards to the guide stationed at the shuttle bus terminal, it was as if we were being handheld from start to finish. Everything ran like clockwork, even the shuttle bus guide who rushed to receive us as soon as we were approaching via an escalator.

The flight itself was uneventful save for a shaky take-off; think of it as an hour long train ride from one end of Singapore to the other and you pretty much have an idea of what a domestic flight is. There’s even a monitor that shows you the pilot’s perspective as the plane takes off from the runway and into the clouds, though I would advise against watching it if you have the jitters about flying. 😛

It’s also a great time to catch up on some sleep. The seats on the ANA plane were rather cramped compared to the generous leg space on the SQ flight, but if you’re really tired after a 7 hour flight across the Pacific Ocean, anything goes. 😛

One hour later and we’re finally descending into Hokkaido! 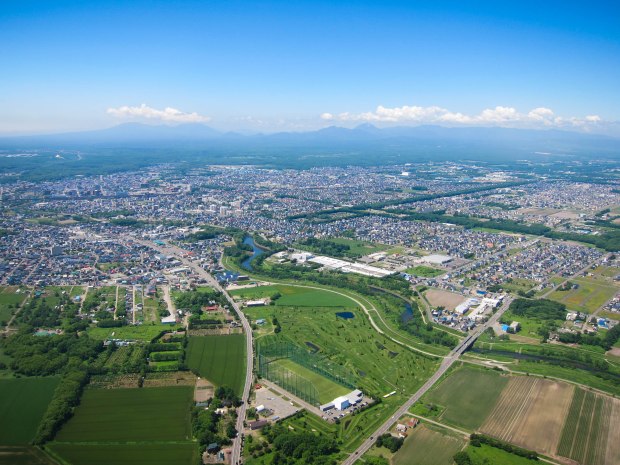 With its patchwork fields and buildings clustered neatly together, the descend into Hokkaido was a very pretty one so I wasted no time snapping a few pictures (and taking advantage of the fact that I managed to score a window seat!).

Views like these are probably a dime a dozen to the locals who were mostly pre-occupied with their newspapers but to a Singapore-bound girl like me, sprawling fields are something I just can’t get enough of. 😉

We would drive by these same fields during our tours to Furano and Yuriba later on but that’s another story I’ll save for later. 😀

Our abode for the duration for the trip was Sapporo Grand Hotel, which serves business and leisure travellers in Sapporo.

To get there, you can either take the train or the bus; we opted for the Chuo Bus which took us straight to our hotel after meandering around Sapporo. Good if you’re not pressed for time, want to catch forty winks or need to get familiarised with Sapporo’s attractions (Odori Park and Susukino are some of the stops along the way). 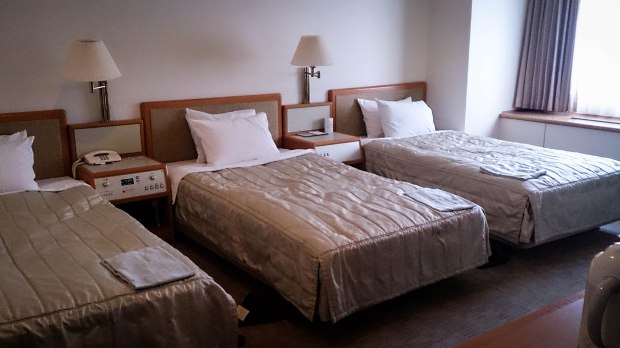 Sapporo Grand Hotel really does live up to its name of being a grand one. There are three entrances from which you can come and go, including one that is directly accessible from the Sapporo Underground Walkway. (I would advise accessing it via the underground walkway since the hotel’s monotone exterior is a tad hard to spot amongst many other buildings which resulted in us losing our way back on a couple of occasions – I know, geography wasn’t one of my strong subjects at school.)

Our room was more like a mini apartment of sorts, with a walkway to store your luggage and wear your shoes, as well as a generous dressing area (pictured above).

And not forgetting their service which was also impeccable; a lady porter who transported our luggage and showed us around the room so we wouldn’t have to scratch our heads over how to use the amenities. The only oddity was the tap for drinking water being installed right next to the sink in the bathroom.

Well, that sums up our first day in the northernmost prefecture of Japan. Spent the rest of it resting up and figuring our way around, so I’ll follow up with more posts about sightseeing and of course, food! Stay tuned. 😀

2 thoughts on “Hello Hokkaido! From Singapore to Sapporo”

[#wherechuegoing] It's the most wonderful time of the year. ✨🎄
[#chuefromhome] Nothing like a DIY snack platter to power me through this weekend's events and livestreams! 🤤🧀🍪
[#chuefromhome] $5 off these plump, pungent MSW durians which were the best thing to happen this long weekend! 😍 Code at the bottom of this post.
[#chuefromhome] Me: I HATE TOMATOES. Also me:
[#chueonbugis] As an avid foodie and gamer, I must say it was the drool-worthy food that caught my eye the first time I played Genshin Impact, not the husbandos. 😬 Still, pretty stoked to have scored a table at HoYoFEST which happened last week!
[#chueondakota] Bak chor mee is one of those quintessentially Singaporean things that is hard not to love, yet is not easy to nail either. Thankfully for our local food heritage, new contenders like @mincedpork.bros are rising to the challenge of preserving one of our favourite supper dishes, albeit with a few modern twists.
[#chuefromhome] Launched three months ago, @crabnburger plugs the gap in Singapore's burger scene where meat-based goods are aplenty, but options for seafood lovers and far and few between. Tuck into mouthwatering crab-based burgers and snacks of hearty proportions and extra sinful flavours!
[#chueonchinatown] Third time lucky. 😋🍴🍝
[#chueoncityhall] I'm a sucker for cakes and snacks that come in cute packages, so when @okashigaku's cake-in-a-can first went viral on Japanese social media, I immediately added it to my bucket list for my next (if ever) trip. Fortunately, trying these cakes will be a reality in Singapore come 16 Sept, when its first overseas vending machine opens at @sunteccity!