Unless you’ve been living under a rock, you would have seen or heard of Pokémon at least once. Having graced our Gameboys and TV screens for over two decades, the adorable Pocket Monsters recently invaded our shores and set up their first shop in the ASEAN region at EwF Bugis Junction!

Being an ardent fan of Pikachu and gang , I decided to visit the Pokémon Pop Up Cafe to see if it was *really* worth the seven hour wait. 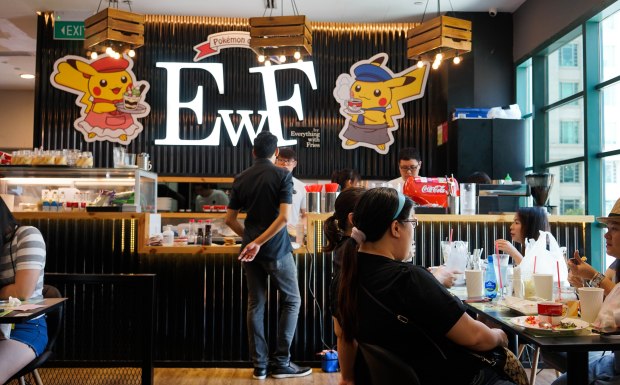 Whoever said that Singaporeans are incapable of waking up early on a weekend have clearly never dangled a big enough carrot in front of them – a carrot in the form of a pop up cafe featuring their ultimate favourite cartoon character. Half an hour before opening time, and the queue had already stretched to the level below it. 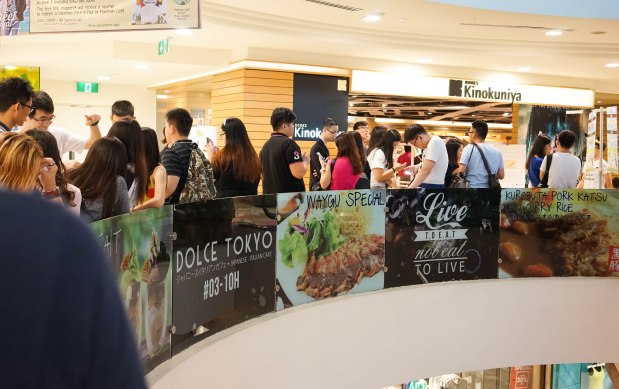 About one hour in, the group in front of me gave up and left. This was when we were still at the level below EwF. Take note that the place sits 40 people, all of them likely to spend as long as they can in there. 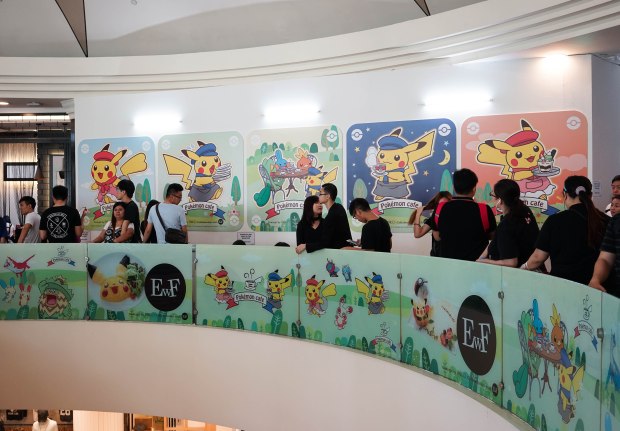 Half an hour after that, we were escorted up the escalator by a staff donning a Pikachu headband and tail belt (I WANT ONE). Another couple bites the dust. Stubborn me decided that I had already spent too much time at this point to back out. 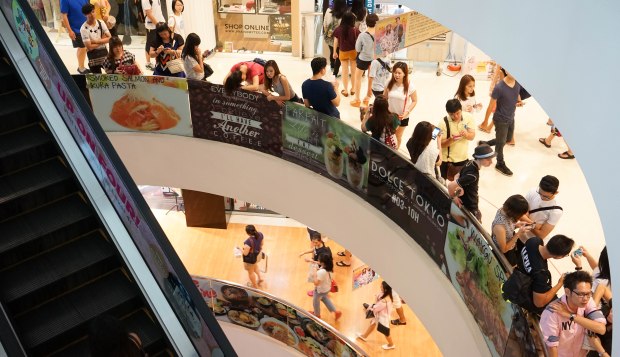 One more snaking queue later, and we were finally approaching the pearly, yellow gates! 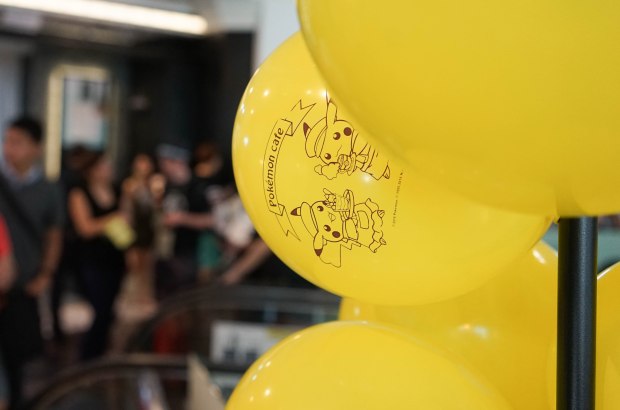 To save time, you’ll be handed the menu to ponder over while you queue, whereupon you’ll be escorted to place your order chit at the counter before being led to your pre-assigned table. I can’t imagine if they had let everyone mull over their choices at the table – I think the wait would be twice as long.

I fully expected to see only youngsters and otaku here, but there was a surprising amount of older folks as well! I’m talking about middle aged uncles and aunties whom you would expect to scoff at concepts like these. Clearly, the Pokémon hype transcends age. 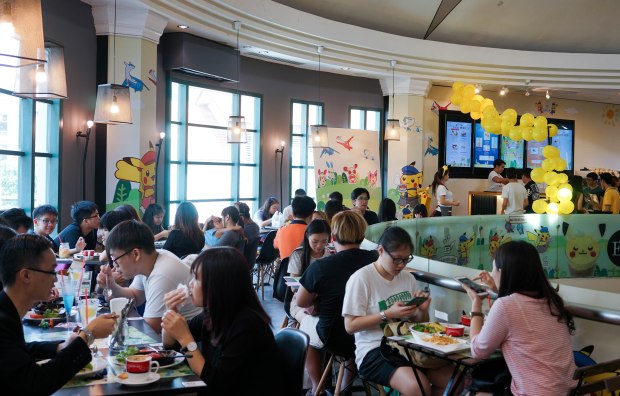 Since it was already well into lunchtime by the time I was seated, whatever I ordered had better be filling enough to make up for the hunger pangs.

This meant that dishes like the Pikachu Smiling Rice Omelette with Magma Sauce ($25++) and Pikachu’s Sweet Pancake ($20++), which were starch heavy but void of other substantial ingredients, were out. You do get a new special edition Pokémon Cafe cup to take home if you order either of them, though. 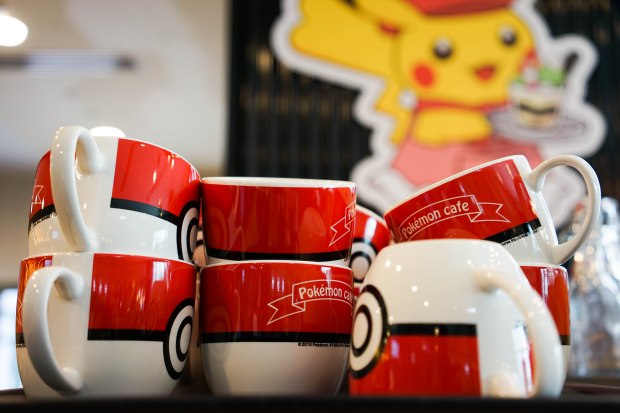 To quench my thirst after waiting in that insane queue, I went for the Volt Tackle Soda ($10++). Not the cheapest on the menu, but you get a tall glass of passionfruit soda with lemon sorbet and popping candy. 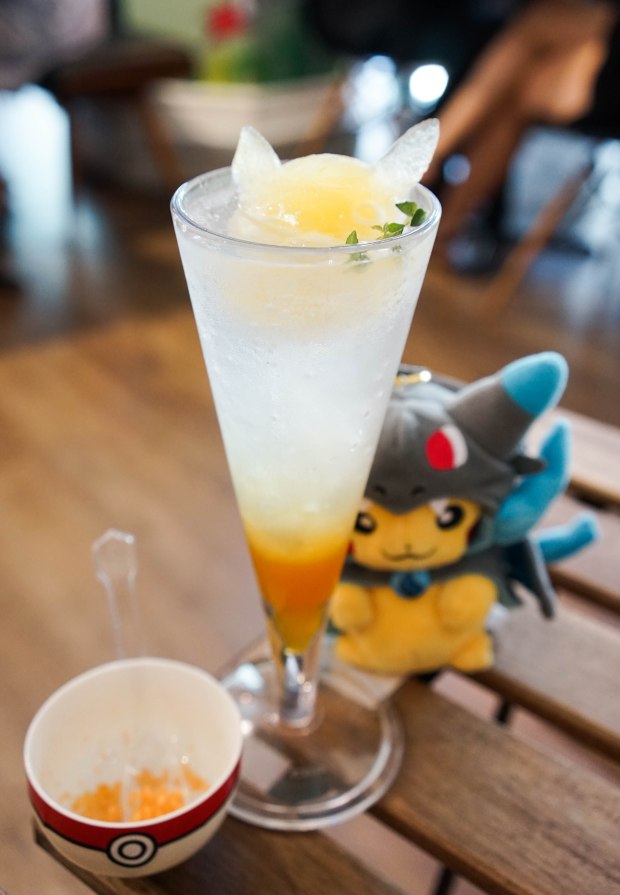 The drink arrived at my table like an electrifying tower of cool and it was satisfyingly refreshing! Not to mention the cute Pikachu shaped sorbet.

I was a bit disappointed by how little popping candy there was, though. Seems like there was barely enough to fill the top. 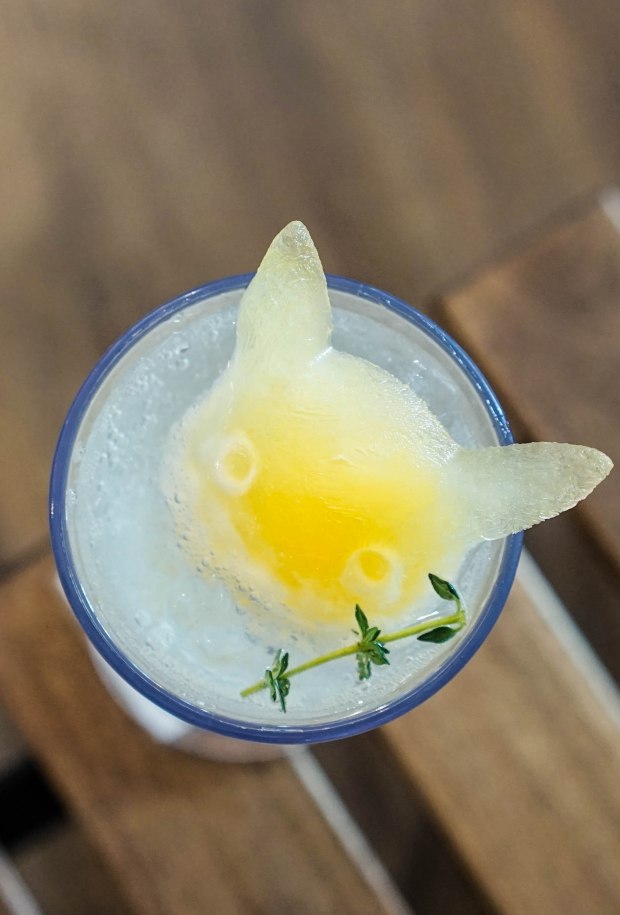 Equally popular is the Pikachu Latte ($8++ hot, $9++ iced), for obvious reasons. But after seeing how long the iced latte was left standing in the storage counter for the next customer… err.. no thanks. I like my coffee freshly brewed. 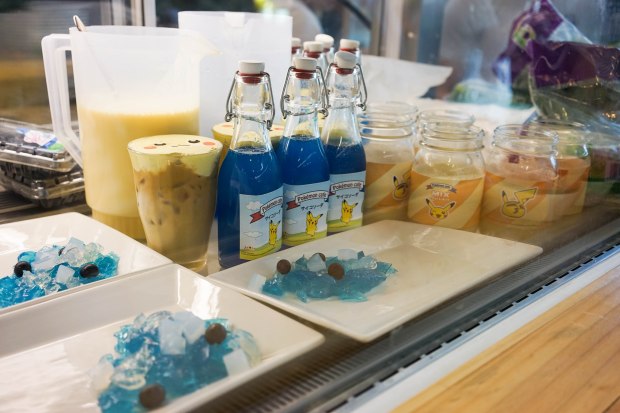 My choice of main was the Battle on Pikachu! Level-up with Rare Candy! ($20++), which is essentially spaghetti with assorted toppings and beef patty and mashed potatoes wrapped in a crepe. (Is it just me, or should the Pokémon Cafe change its name to Pikachu Cafe?  There’s literally no other character represented on the menu.) 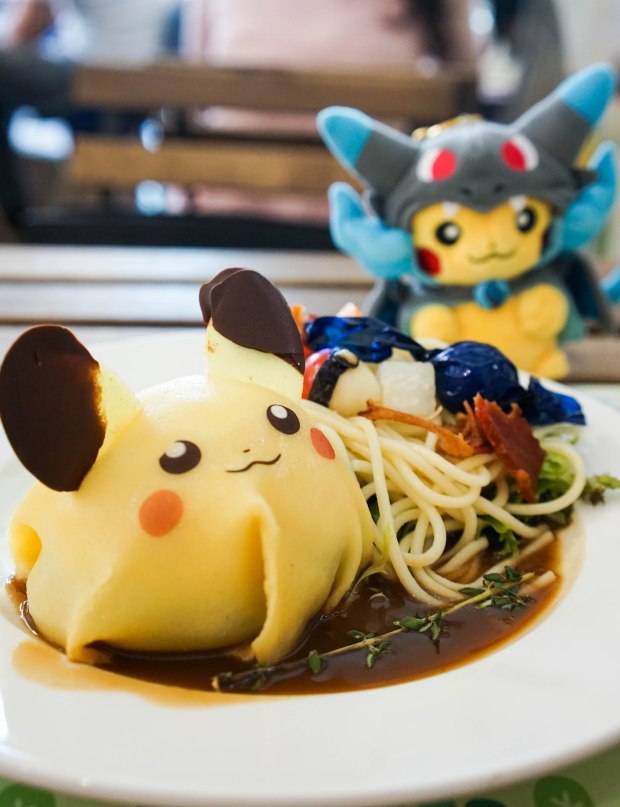 Out of all the mains, this is easily the most colourful and most complicated to assemble. Those are monaka tipped crepes for Pikeachu’s ears, in case you were wondering.

Personally, I would have preferred the spaghetti to be a little more al dente. It tasted very kiddy too, what with the steamed carrots, fried bacon, brightly wrapped candy and pokéball made out of a cherry tomato and pigeon egg half put together.

And yes, that’s actual candy in the wrapper – chocolate, in fact. Funny how I always imagined Rare Candy to taste like the rock candy from my childhood. 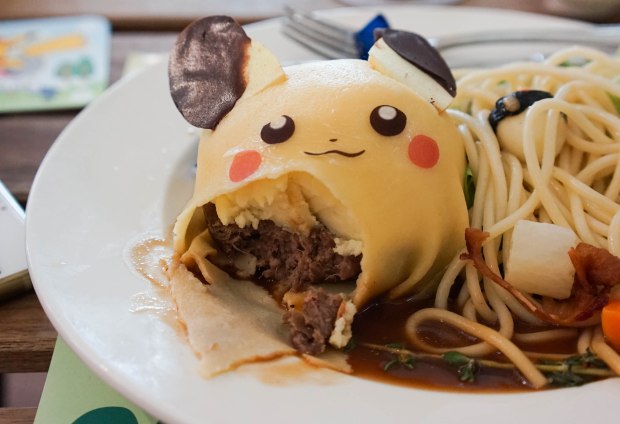 Moment of truth for Pikachu…ok, it’s quite value for money considering you get spaghetti with beef patty and mashed potato. Although I heard feedback about it being too cold and hard, it was all right for me.

That said, I couldn’t get over the mix of sweet and savoury in the same bite. Kids will love the sweetness, but it was hella strange on my tastebuds. Wouldn’t it go better with a savoury crepe?

Dessert was another massive serving of Pikachu – the Thunder Shock Parfait($15++)! 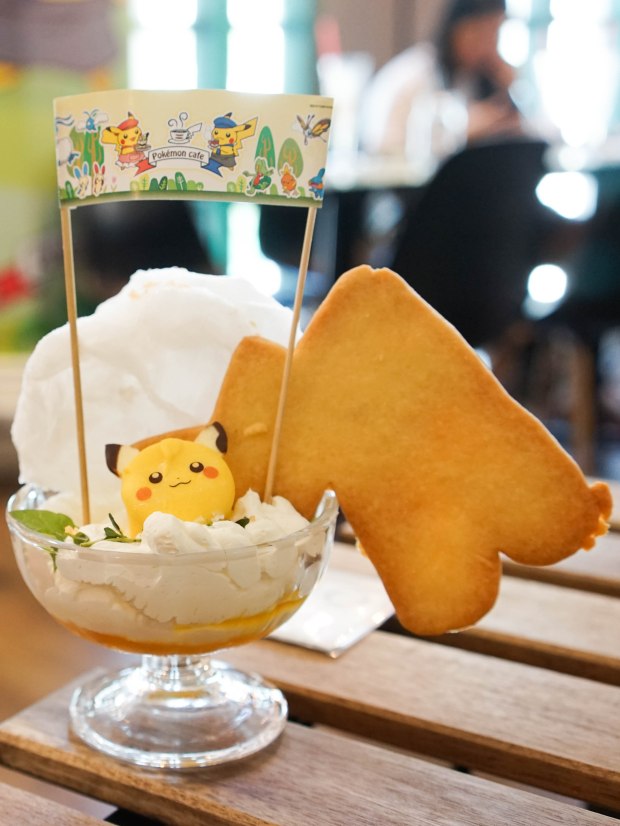 Crackling powder topped cotton candy, sponge cake, creamy parfait, gooey lemon-centered macaron and massive Pikachu tail shaped biscuit… best to attempt this with a friend or if you intend to run twenty rounds later to burn off all those calories!

This dessert is practically one spoonful of cream and syrup after another; I could hardly taste the sponge cake. It’s also not the easiest to eat – think negotiating your spoon around a chunky biscuit, sticky cotton candy, and a decorative banner. Gosh, I’m feeling major calories guilt just typing this out!

For true Pikaphiles, the cafe is also selling merchandise from the Pokémon Centres in Japan. Exclusive cafe memorabilia, such as notepads, totes and shirts, are also available. Purchase any item and you’ll receive a one-time code to download an original Pokémon Cafe Pikachu on the Omega Ruby and Alpha Sapphire games. Gotta catch ’em all! 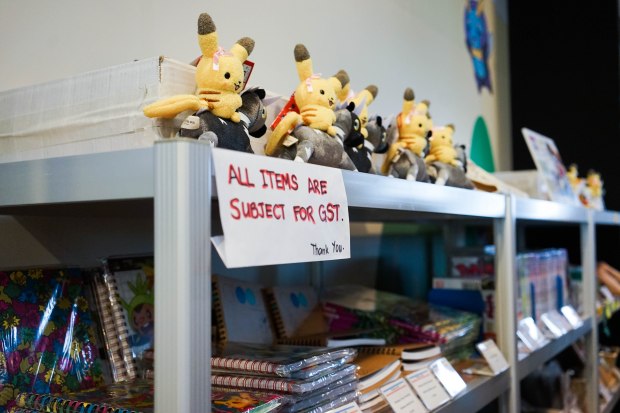 There’s also a photo booth with Pikachu hoodies and headbands for you to pose your heart out. 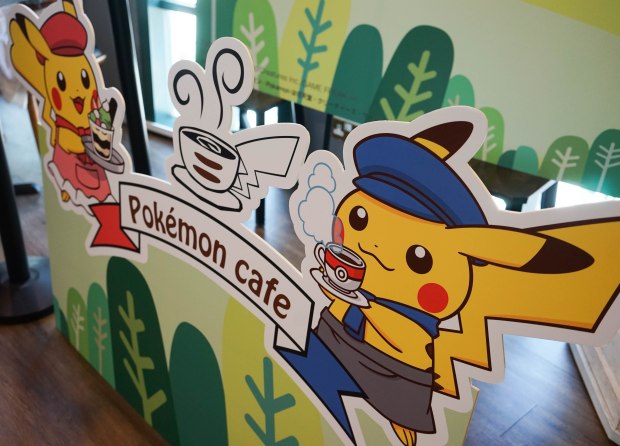 And if you’re lucky enough, you just might run into the yellow electric mouse himself! 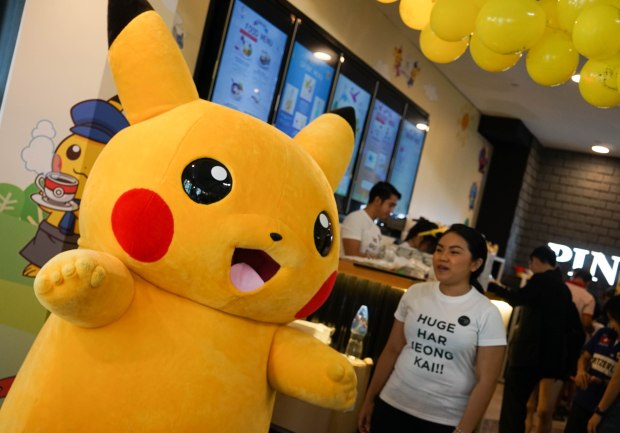 Would I queue up for this again? Probably not, as the items were a tad overpriced for their quality and wait time. I would recommend waiting for the hype to die down if you’re not a hardcore fan. 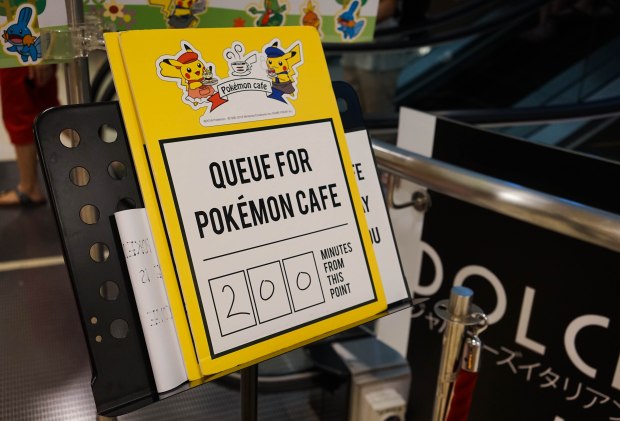 Again, this review is not meant to justify or scoff at the mega hype train that is the Pokémon Cafe, but to give an honest account of the waiting time and overall experience.

If you’re still keen on braving the crowd, here’s how you can make the most of your visit:

One thought on “Pokémon Cafe by EwF and PARCO @ Bugis Junction (27 May to 31 July) – Worth the Seven Hour Wait?”